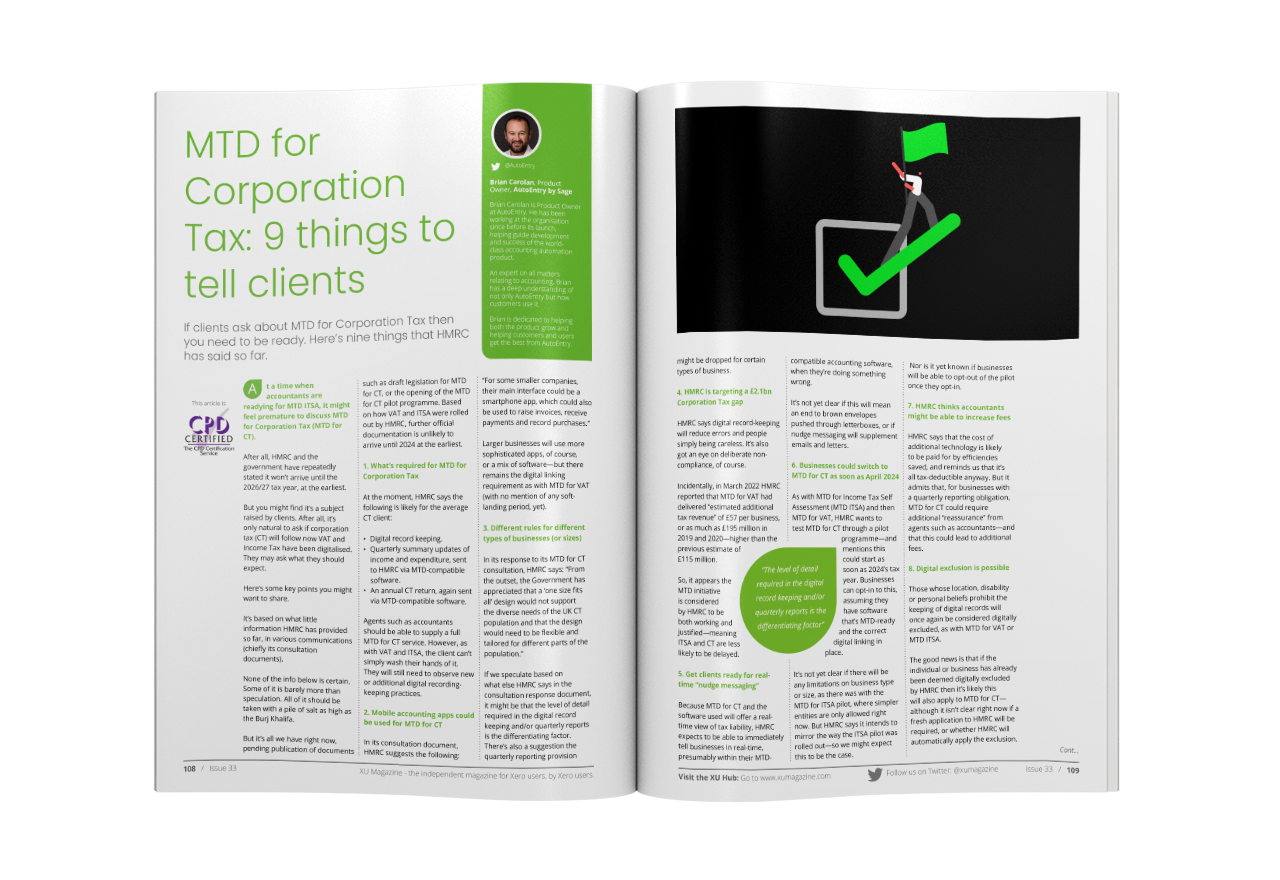 If clients ask about MTD for Corporation Tax then you need to be ready. Here’s nine things that HMRC has said so far.
This article originated from the Xero blog. The XU Hub is an independent news and media platform - for Xero users, by Xero users. Any content, imagery and associated links below are directly from Xero and not produced by the XU Hub.
You can find the original post here:

At a time when accountants are readying for MTD ITSA, it might feel premature to discuss MTD for Corporation Tax (MTD for CT).

After all, HMRC and the government have repeatedly stated it won’t arrive until the 2026/27 tax year, at the earliest.

But you might find it’s a subject raised by clients. After all, it’s only natural to ask if corporation tax (CT) will follow now VAT and Income Tax have been digitalised. They may ask what they should expect.

It’s based on what little information HMRC has provided so far, in various communications (chiefly its consultation documents).

None of the info below is certain. Some of it is barely more than speculation. All of it should be taken with a pile of salt as high as the Burj Khalifa.

But it’s all we have right now, pending publication of documents such as draft legislation for MTD for CT, or the opening of the MTD for CT pilot programme. Based on how VAT and ITSA were rolled out by HMRC, further official documentation is unlikely to arrive until 2024 at the earliest.

At the moment, HMRC says the following is likely for the average CT client:

Agents such as accountants should be able to supply a full MTD for CT service. However, as with VAT and ITSA, the client can’t simply wash their hands of it. They will still need to observe new or additional digital recording-keeping practices.

2. Mobile accounting apps could be used for MTD for CT

In its consultation document, HMRC suggests the following: “For some smaller companies, their main interface could be a smartphone app, which could also be used to raise invoices, receive payments and record purchases.”

Larger businesses will use more sophisticated apps, of course, or a mix of software—but there remains the digital linking requirement as with MTD for VAT (with no mention of any soft-landing period, yet).

3. Different rules for different types of businesses (or sizes)

In its response to its MTD for CT consultation, HMRC says: “From the outset, the Government has appreciated that a ‘one size fits all’ design would not support the diverse needs of the UK CT population and that the design would need to be flexible and tailored for different parts of the population.”

If we speculate based on what else HMRC says in the consultation response document, it might be that the level of detail required in the digital record keeping and/or quarterly reports is the differentiating factor. There’s also a suggestion the quarterly reporting provision might be dropped for certain types of business.

HMRC says digital record-keeping will reduce errors and people simply being careless. It’s also got an eye on deliberate non-compliance, of course.

Incidentally, in March 2022 HMRC reported that MTD for VAT had delivered “estimated additional tax revenue” of £57 per business, or as much as £195 million in 2019 and 2020—higher than the previous estimate of £115 million.

So, it appears the MTD initiative is considered by HMRC to be both working and justified—meaning ITSA and CT are less likely to be delayed.

Because MTD for CT and the software used will offer a real-time view of tax liability, HMRC expects to be able to immediately tell businesses in real-time, presumably within their MTD-compatible accounting software, when they’re doing something wrong.

It’s not yet clear if this will mean an end to brown envelopes pushed through letterboxes, or if nudge messaging will supplement emails and letters.

6. Businesses could switch to MTD for CT as soon as April 2024

As with MTD for Income Tax Self Assessment (MTD ITSA) and then MTD for VAT, HMRC wants to test MTD for CT through a pilot programme—and mentions this could start as soon as 2024’s tax year. Businesses can opt-in to this, assuming they have software that’s MTD-ready and the correct digital linking in place.

It’s not yet clear if there will be any limitations on business type or size, as there was with the MTD for ITSA pilot, where simpler entities are only allowed right now. But HMRC says it intends to mirror the way the ITSA pilot was rolled out—so we might expect this to be the case.

Nor is it yet known if businesses will be able to opt-out of the pilot once they opt-in.

7. HMRC thinks accountants might be able to increase fees

HMRC says that the cost of additional technology is likely to be paid for by efficiencies saved, and reminds us that it’s all tax-deductible anyway. But it admits that, for businesses with a quarterly reporting obligation, MTD for CT could require additional “reassurance” from agents such as accountants—and that this could lead to additional fees.

Those whose location, disability or personal beliefs prohibit the keeping of digital records will once again be considered digitally excluded, as with MTD for VAT or MTD ITSA.

The good news is that if the individual or business has already been deemed digitally excluded by HMRC then it’s likely this will also apply to MTD for CT—although it isn’t clear right now if a fresh application to HMRC will be required, or whether HMRC will automatically apply the exclusion.

And just in case it isn’t clear, HMRC points out that if a business is already exempt from filing CT returns online then they will also be treated as exempt for MTD for CT.

Insolvency procedures are once again likely to lead to exemption.

9. Charities/non-profits/amateur sports groups might get a special version of MTD for CT

In its response to the MTD for CT consultation, HMRC says it is “open to exploring a more bespoke design for [charities/non-profits] that reflects their specific circumstances”.

This is undoubtedly because many of these organisations, although registered for CT, have small turnovers and volunteer staffing—and the burden of MTD for CT therefore is considered disproportionate.

Automation: Be ready for more MTD

As the increasing requirements of MTD continue to build for practices and their clients, there’s only one sane way forward: Automate as many workflows and processes as possible. This not only saves time but also increases the potential for revenue and better client service offerings.

AutoEntry is the market leader in data entry automation. It transforms days of data entry work into hours while reducing concerns about accuracy. Give it a free, no-commitment trial by clicking the link below.

To find out more about AutoEntry by Sage, including a special offer for 3 months free
Visit their website 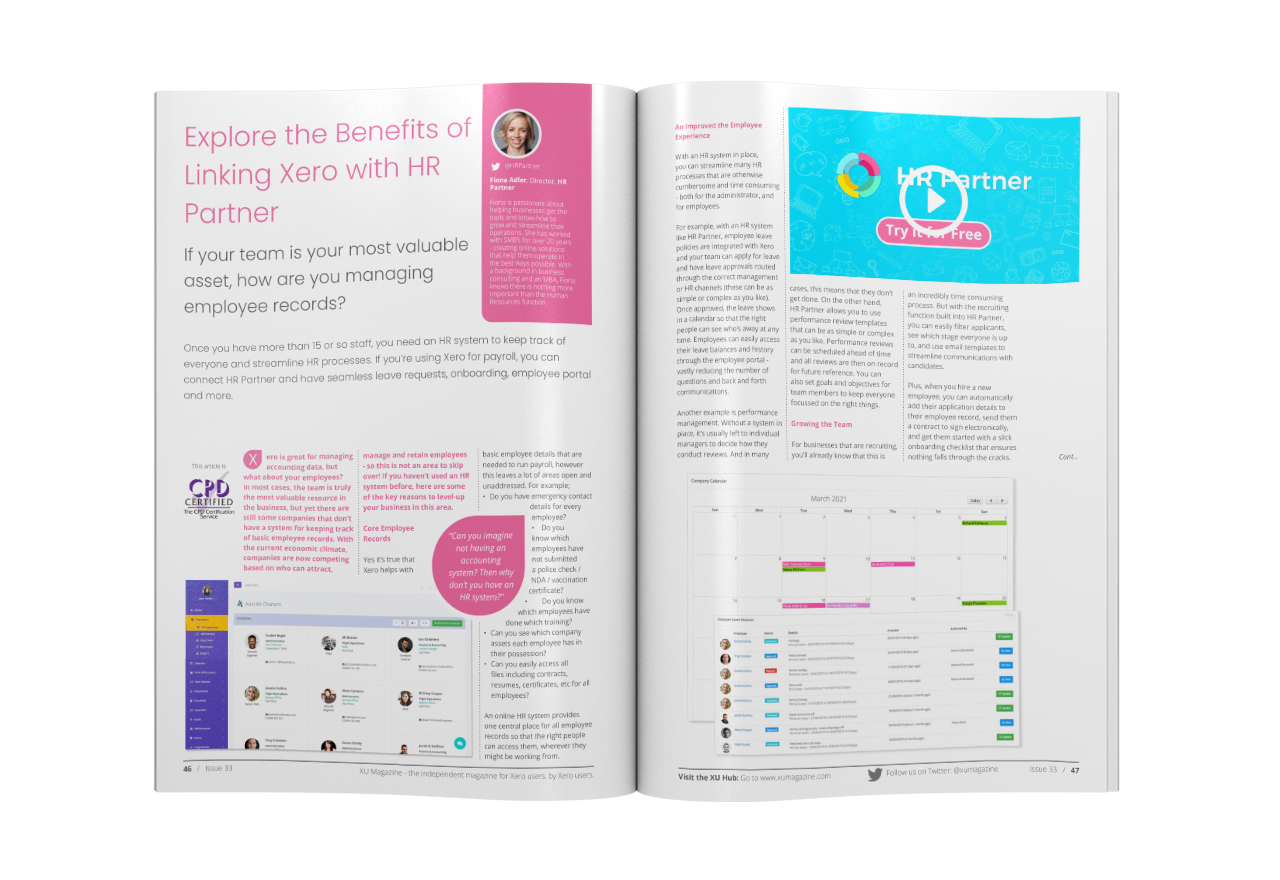 Explore the Benefits of Linking Xero with HR Partner 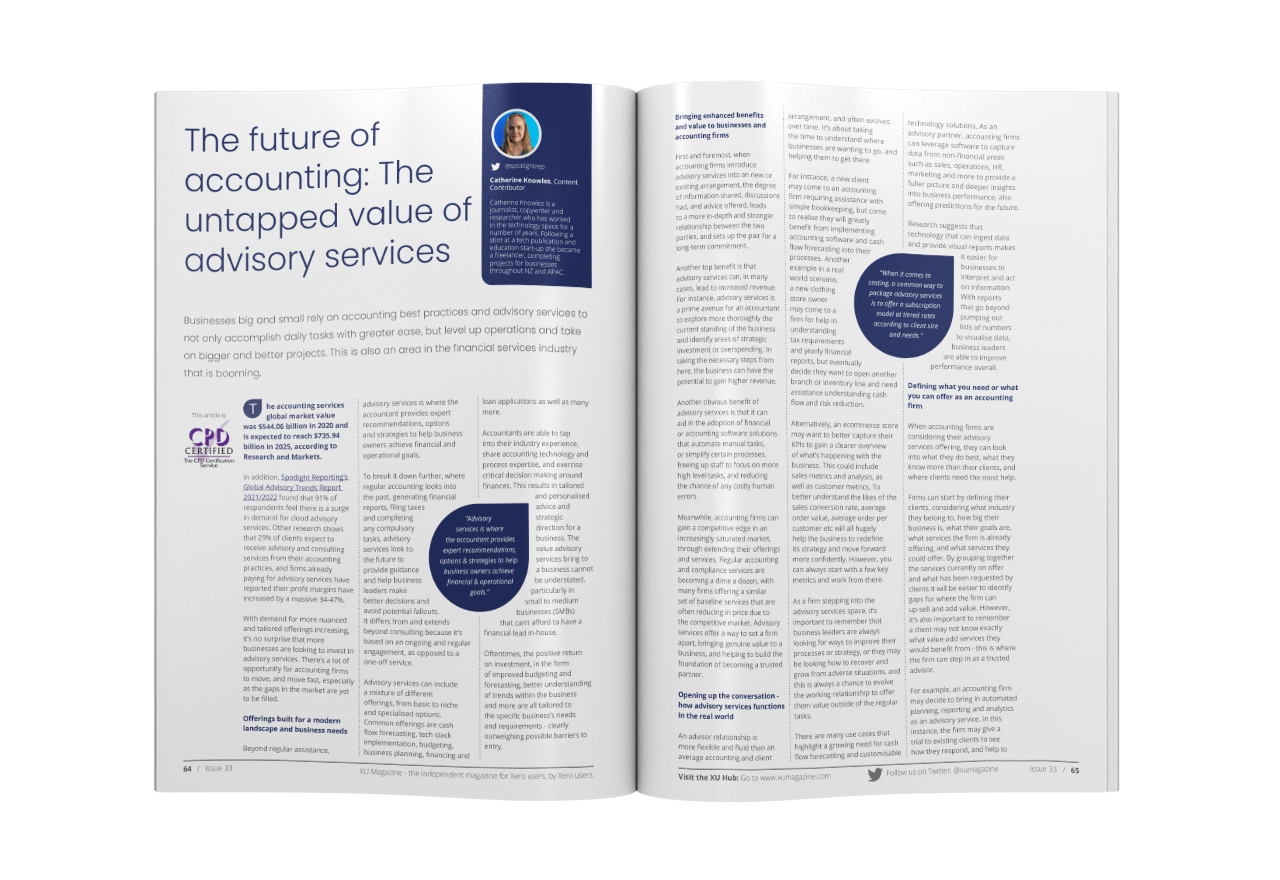 The future of accounting: The untapped value of advisory services