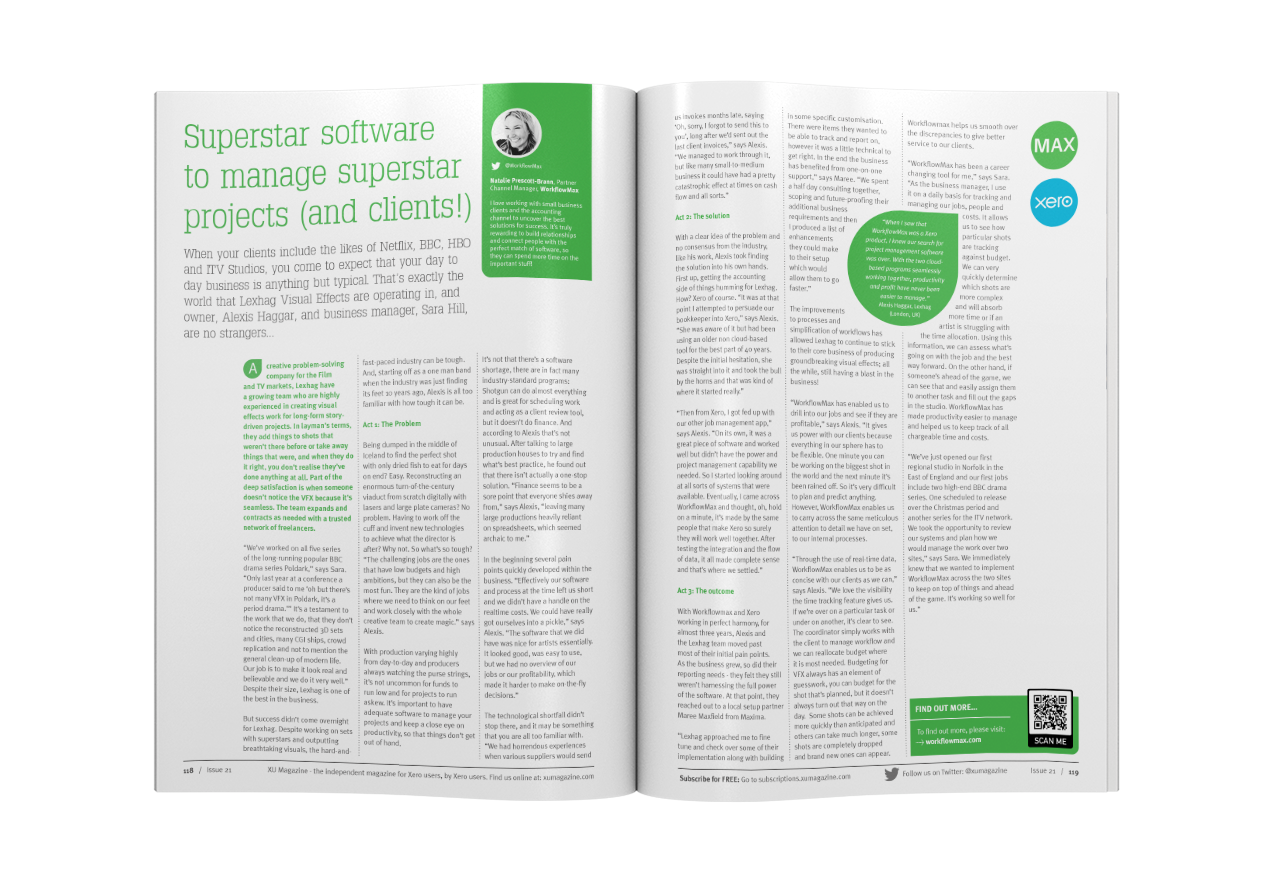 When your clients include the likes of Netflix, BBC, HBO and ITV Studios, you come to expect that your day to day business is anything but typical. That’s exactly the world that Lexhag Visual Effects are operating in, and owner, Alexis Haggar, and business manager, Sara Hill, are no strangers…

A creative problem-solving company for the Film and TV markets, Lexhag have a growing team who are highly experienced in creating visual effects work for long-form story-driven projects. In layman’s terms, they add things to shots that weren’t there before or take away things that were, and when they do it right, you don’t realise they’ve done anything at all. Part of the deep satisfaction is when someone doesn’t notice the VFX because it’s seamless. The team expands and contracts as needed with a trusted network of freelancers.

“We’ve worked on all five series of the long-running popular BBC drama series Poldark,” says Sara. “Only last year at a conference a producer said to me ‘oh but there’s not many VFX in Poldark, it’s a period drama.’” It’s a testament to the work that we do, that they don’t notice the reconstructed 3D sets and cities, many CGI ships, crowd replication and not to mention the general clean-up of modern life.  Our job is to make it look real and believable and we do it very well.” Despite their size, Lexhag is one of the best in the business.

But success didn’t come overnight for Lexhag. Despite working on sets with superstars and outputting breathtaking visuals, the hard-and-fast-paced industry can be tough. And, starting off as a one man band when the industry was just finding its feet 10 years ago, Alexis is all too familiar with how tough it can be.

Being dumped in the middle of Iceland to find the perfect shot with only dried fish to eat for days on end? Easy. Reconstructing an enormous turn-of-the-century viaduct from scratch digitally with lasers and large plate cameras? No problem. Having to work off the cuff and invent new technologies to achieve what the director is after? Why not. So what’s so tough? “The challenging jobs are the ones that have low budgets and high ambitions, but they can also be the most fun. They are the kind of jobs where we need to think on our feet and work closely with the whole creative team to create magic.” says Alexis.

With production varying highly from day-to-day and producers always watching the purse strings, it’s not uncommon for funds to run low and for projects to run askew. It’s important to have adequate software to manage your projects and keep a close eye on productivity, so that things don’t get out of hand.

It’s not that there’s a software shortage, there are in fact many industry-standard programs: Shotgun can do almost everything and is great for scheduling work and acting as a client review tool, but it doesn’t do finance. And according to Alexis that’s not unusual. After talking to large production houses to try and find what’s best practice, he found out that there isn’t actually a one-stop solution. “Finance seems to be a sore point that everyone shies away from,” says Alexis, “leaving many large productions heavily reliant on spreadsheets, which seemed archaic to me.”

In the beginning several pain points quickly developed within the business. “Effectively our software and process at the time left us short and we didn’t have a handle on the realtime costs. We could have really got ourselves into a pickle,” says Alexis. “The software that we did have was nice for artists essentially. It looked good, was easy to use, but we had no overview of our jobs or our profitability, which made it harder to make on-the-fly decisions.”

The technological shortfall didn’t stop there, and it may be something that you are all too familiar with. “We had horrendous experiences when various suppliers would send us invoices months late, saying ‘Oh, sorry, I forgot to send this to you’, long after we’d sent out the last client invoices,” says Alexis. “We managed to work through it, but like many small-to-medium business it could have had a pretty catastrophic effect at times on cash flow and all sorts.”

With a clear idea of the problem and no consensus from the industry, like his work, Alexis took finding the solution into his own hands. First up, getting the accounting side of things humming for Lexhag. How? Xero of course. “It was at that point I attempted to persuade our bookkeeper into Xero,” says Alexis. “She was aware of it but had been using an older non cloud-based tool for the best part of 40 years. Despite the initial hesitation, she was straight into it and took the bull by the horns and that was kind of where it started really.”

“Then from Xero, I got fed up with our other job management app,” says Alexis. “On its own, it was a great piece of software and worked well but didn’t have the power and project management capability we needed. So I started looking around at all sorts of systems that were available. Eventually, I came across WorkflowMax and thought, oh, hold on a minute, it’s made by the same people that make Xero so surely they will work well together. After testing the integration and the flow of data, it all made complete sense and that’s where we settled.”

With Workflowmax and Xero working in perfect harmony, for almost three years, Alexis and the Lexhag team moved past most of their initial pain points. As the business grew, so did their reporting needs – they felt they still weren’t harnessing the full power of the software. At that point, they reached out to a local setup partner Maree Maxfield from Maxima.

“Lexhag approached me to fine tune and check over some of their implementation along with building in some specific customisation. There were items they wanted to be able to track and report on, however it was a little technical to get right. In the end the business has benefited from one-on-one support,” says Maree. “We spent a half day consulting together, scoping and future-proofing their additional business requirements and then I produced a list of enhancements they could make to their setup which would allow them to go faster.’’

The improvements to processes and simplification of workflows has allowed Lexhag to continue to stick to their core business of producing groundbreaking visual effects; all the while, still having a blast in the business!

“WorkflowMax has enabled us to drill into our jobs and see if they are profitable,” says Alexis. “It gives us power with our clients because everything in our sphere has to be flexible. One minute you can be working on the biggest shot in the world and the next minute it’s been rained off. So it’s very difficult to plan and predict anything. However, WorkflowMax enables us to carry across the same meticulous attention to detail we have on set, to our internal processes.

“Through the use of real-time data, WorkflowMax enables us to be as concise with our clients as we can,” says Alexis. “We love the visibility the time tracking feature gives us. If we’re over on a particular task or under on another, it’s clear to see. The coordinator simply works with the client to manage workflow and we can reallocate budget where it is most needed. Budgeting for VFX always has an element of guesswork, you can budget for the shot that’s planned, but it doesn’t always turn out that way on the day.  Some shots can be achieved more quickly than anticipated and others can take much longer, some shots are completely dropped and brand new ones can appear. Workflowmax helps us smooth over the discrepancies to give better service to our clients.

“WorkflowMax has been a career changing tool for me,” says Sara. “As the business manager, I use it on a daily basis for tracking and managing our jobs, people and costs. It allows us to see how particular shots are tracking against budget. We can very quickly determine which shots are more complex and will absorb more time or if an artist is struggling with the time allocation. Using this information, we can assess what’s going on with the job and the best way forward. On the other hand, if someone’s ahead of the game, we can see that and easily assign them to another task and fill out the gaps in the studio.

WorkflowMax has made productivity easier to manage and helped us to keep track of all chargeable time and costs. - Alexis Haggar, Lexhag (London, UK)

“We’ve just opened our first regional studio in Norfolk in the East of England and our first jobs include two high-end BBC drama series. One scheduled to release over the Christmas period and another series for the ITV network. We took the opportunity to review our systems and plan how we would manage the work over two sites,” says Sara. We immediately knew that we wanted to implement WorkflowMax across the two sites to keep on top of things and ahead of the game. It’s working so well for us.” 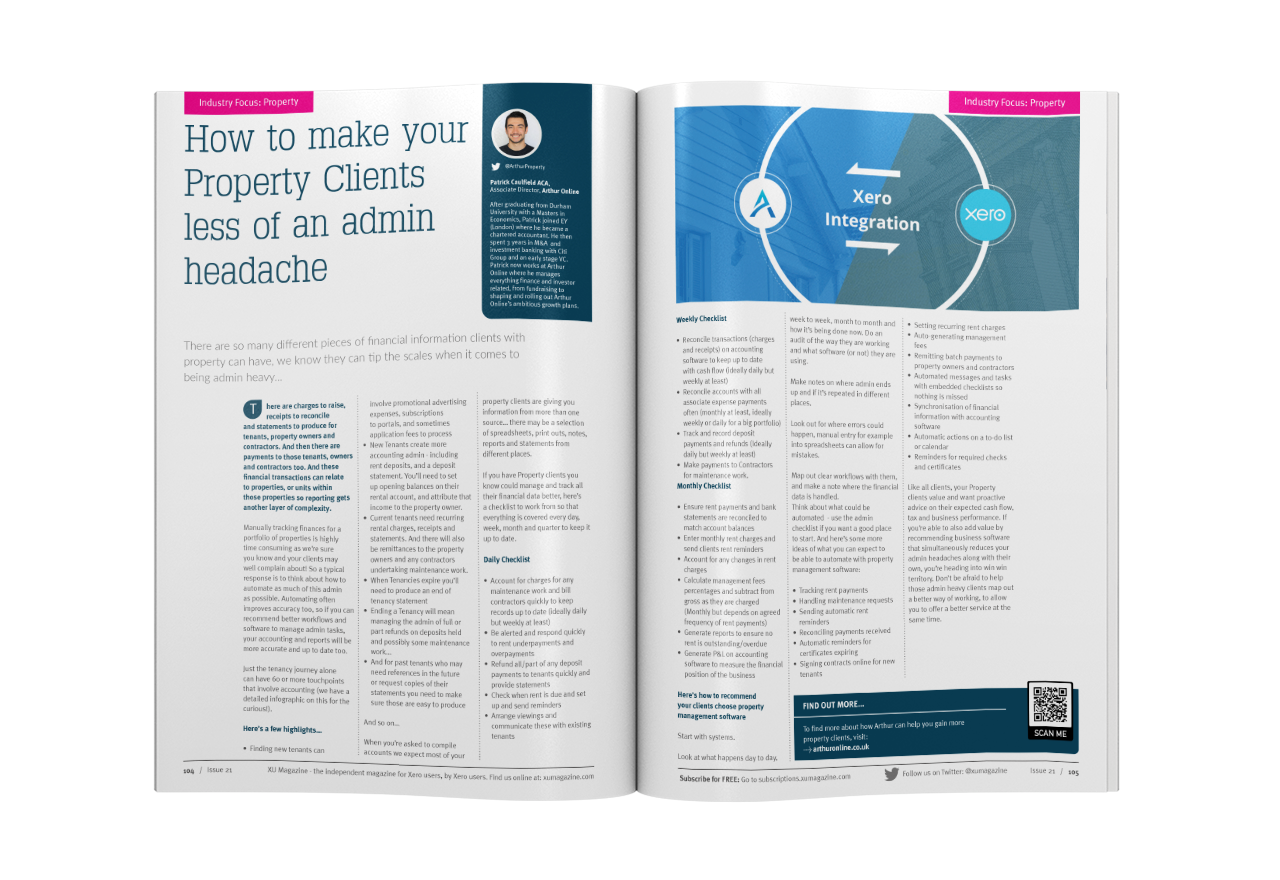 How to make your Property Clients less of an admin headache 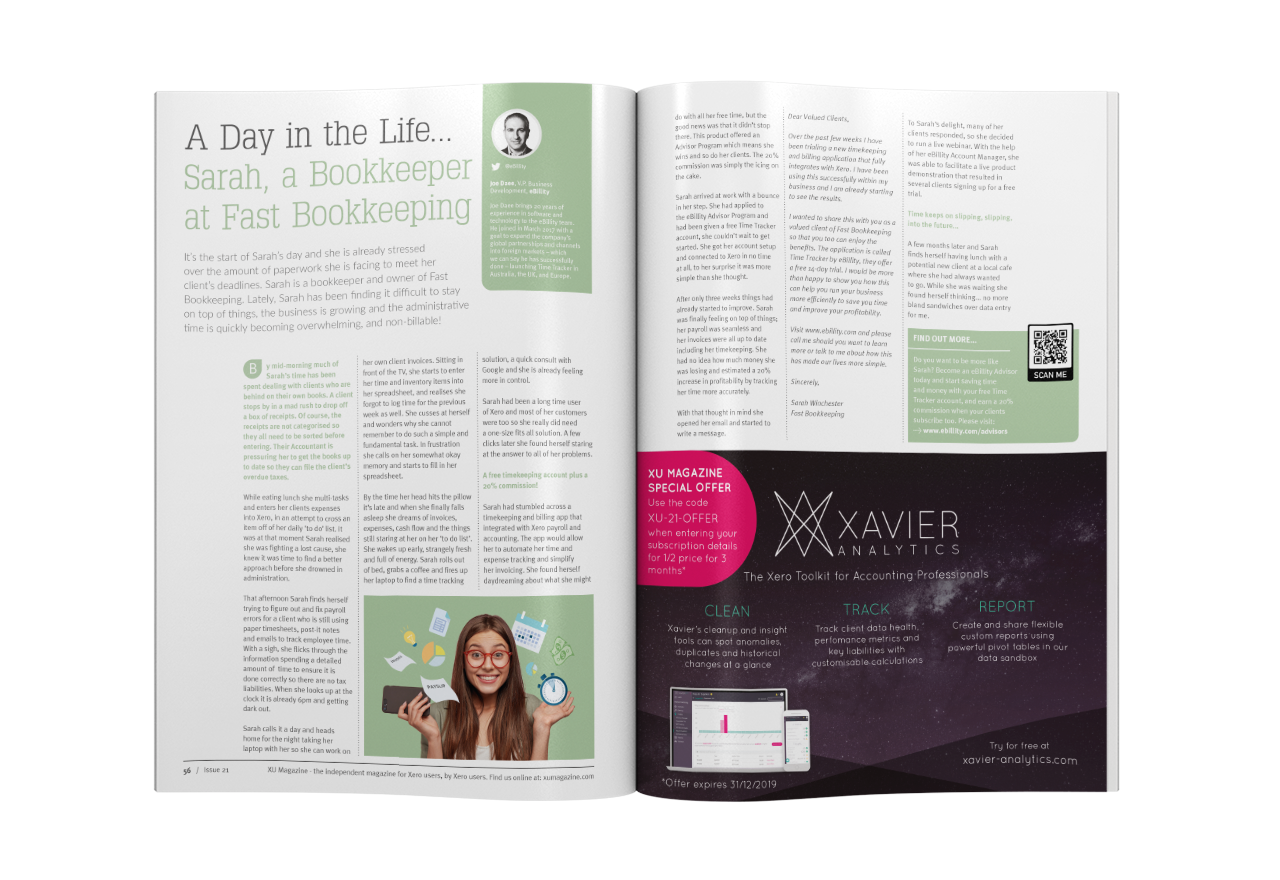 A Day in the Life… Sarah, a Bookkeeper at Fast Bookkeeping 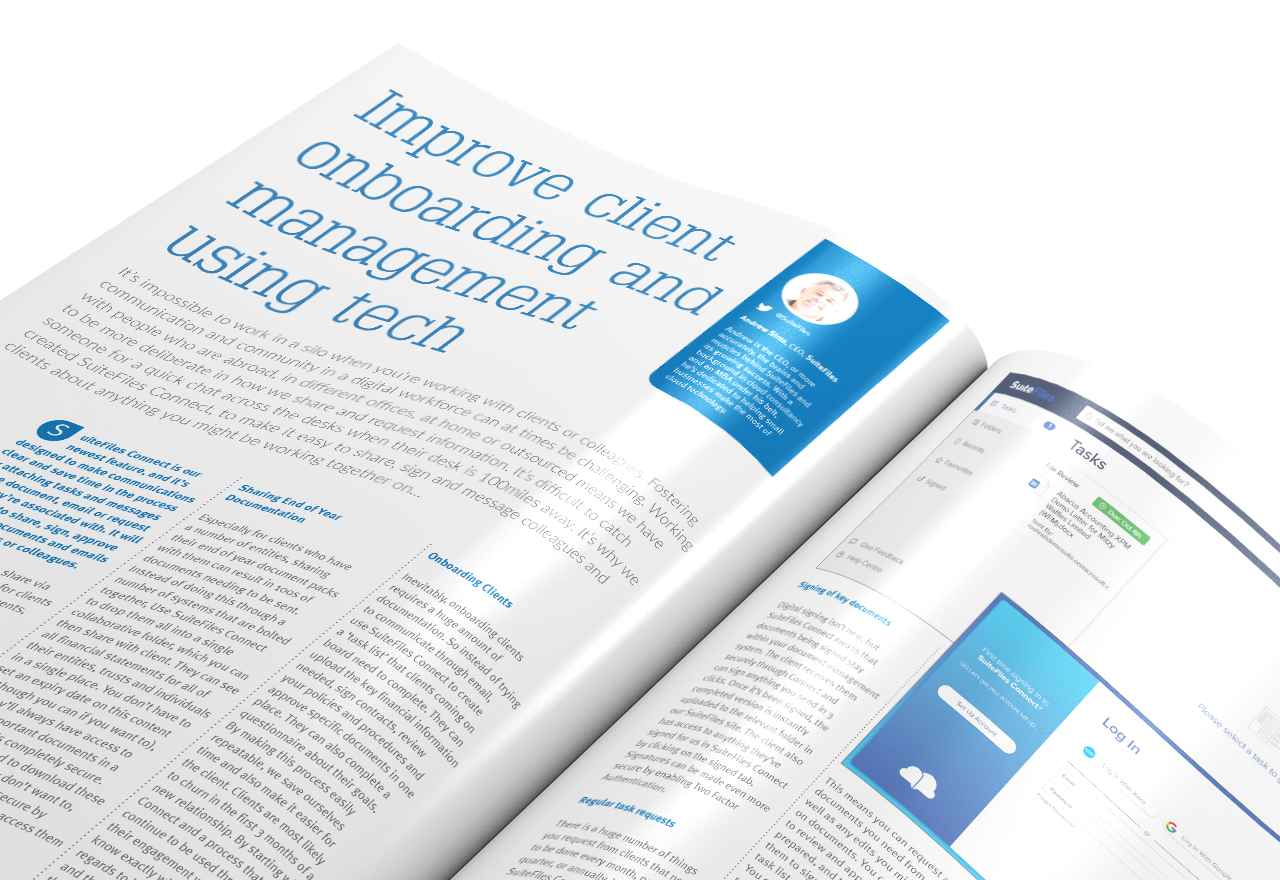