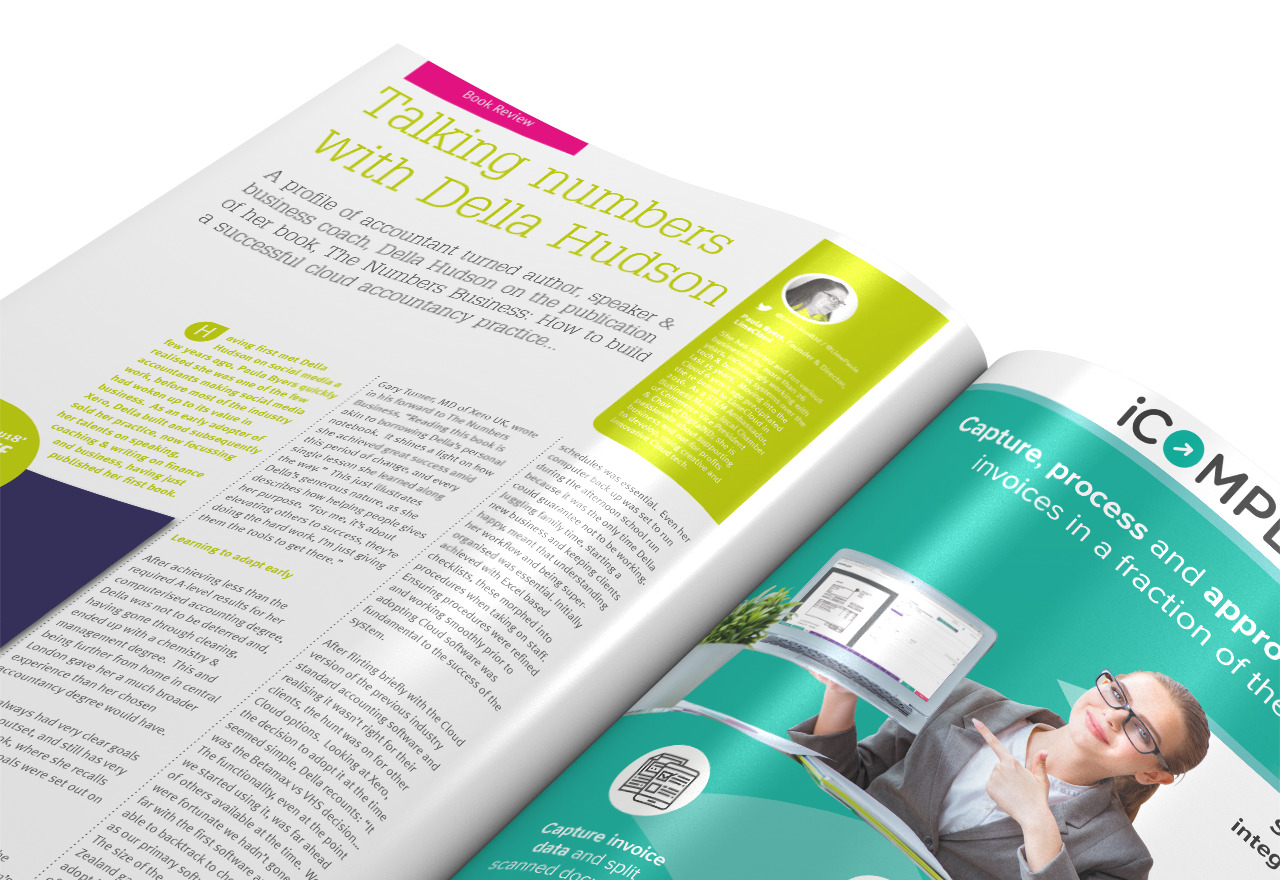 A profile of accountant turned author, speaker & business coach, Della Hudson on the publication of her book, The Numbers Business: How to build a successful cloud accountancy practice...

Having first met Della Hudson on social media a few years ago, Paula Byers quickly realised she was one of the few accountants making social media work, before most of the industry had woken up to its value in business.  As an early adopter of Xero, Della built and subsequently sold her practice, now focussing her talents on speaking, coaching & writing on finance and business, having just published her first book.
‍

Gary Turner, MD of Xero UK, wrote in his forward to The Numbers Business, “Reading this book is akin to borrowing Della’s personal notebook.  It shines a light on how she achieved great success amid this period of change, and every single lesson she learned along the way.”  This just illustrates Della’s generous nature, as she describes how helping people gives her purpose, “For me, it’s about elevating others to success, they’re doing the hard work, I’m just giving them the tools to get there.”

After achieving less than the required A-level results for her computerised accounting degree, Della was not to be deterred and, having gone through clearing, ended up with a chemistry & management degree.  This and being further from home in central London gave her a much broader experience than her chosen accountancy degree would have.

Della always had very clear goals from the outset, and still has very first notebook, where she recalls her business goals were set out on the first page!

Setting up her practice from the kitchen table, around her children’s schedules was essential.  Even her computer back up was set to run during the afternoon school run because it was the only time Della could guarantee not to be working.  Juggling family time, starting a new business and keeping clients happy, meant that understanding her workflow and being super-organised was essential. Initially achieved with Excel based checklists, these morphed into procedures when taking on staff.  Ensuring procedures were refined and working smoothly prior to adopting Cloud software was fundamental to the success of the system.

After flirting briefly with the Cloud version of the previous industry standard accounting software and realising it wasn’t right for their clients, the hunt was on for other Cloud options.  Looking at Xero, the decision to adopt it at the time seemed simple, Della recounts: “It was the Betamax vs VHS decision… The functionality, even at the point we started using it, was far ahead of others available at the time.  We were fortunate we hadn’t gone too far with the first software and were able to backtrack to choose Xero as our primary software offering.  The size of the company in New Zealand gave us the confidence to adopt it, along with the Xero values of collaboration: it’s not a vendor relationship, it’s a partnership.”

The aim however, was always to sell the business once it had reached her goals and although that ended up being sooner than originally planned, Della’s adaptable approach meant that she took it in her stride to proceed with the sale.  She approached a broker who came back with a list of six options for acquisition.  She met with two who made it to her shortlist, using the criteria of those who would best look after her staff and her Clients, along with offering her the best deal.  The sale closed, giving Della a return 32% above average at the time of sale.

Training for her first Ironman triathlon gave Della a lot of thinking time on what she wanted to do next. Understanding what she had gained and what of the business she wanted to keep, have Della the reason to be productive in the morning. She also describes the empty nest feeling after the business was sold; it had become another child that was then no longer there.

From numbers to words

On starting public speaking, having decided she would get her money’s worth, every talk was videoed or re-purposed into articles for local press, Della’s ambition was to turn it into a book. After selling the business there was a 4 month handover where she had to be available, so writing filled that space brilliantly.  Della says working with a really good publisher is essential and Sue helped enormously shaping her brain dump into the actual book.  Seeing the physical book was mind-blowing and was a testament to Della.

It’s interesting listening to Della talk about the transition from a structured environment managing the staff, clients and business to going back to working from home on a variety of projects at once. Della discovered she was capable of about 2 hours good writing time and, after decent break, medium quality work for the rest of the work day, so she structured her days around that.

Della talks about how you can write anywhere, even from the comfort of your own bed! Although a luxury for a practicing accountant, especially during busy times, Della even managed to whisk herself away to Spain for a week in January. This gave Della the chance to focus on writing her book.

Having built a network of contacts, Della now has people asking if she would be interested in opportunities as they appear. Although, Della did and still does struggle to a certain extent with the bitty work as a consultant, but the variety makes it interesting. She describes, almost with a sense of wonder, how satisfying it is having had a hand in all those businesses on her journey though accountancy.

Whether coaching her children, staff, athletes at a local club or her clients now, Della’s passion to help them be the best version of themselves comes across.  Even her choice of venue for the launch of the book, at the Bloodhound SCC project is a chance to inspire others.

There are several books specific to the Xero audience now available, not least Xero’s own Pacesetters, which offers examples of many different firms and Will Farnell’s The Digital Firm, taking an existing firm digital.

The Numbers Business is written from a start-up perspective – for newly qualified staff just starting out, who maybe don’t necessarily have the business experience, to people wanting to start and grow from a part time business exactly as Della did.  The book is written for qualified and part qualified accountants or bookkeepers, although the principles apply to anyone in business and she has many other clients finding it useful.

No one book is the answer to everything, but Della’s approach is very much ‘this is what I did, take what is useful, understand the principles of the rest and apply them to you’, rather than a prescriptive ‘do exactly as I did’.

Della wrote the book as if she was giving advice to her past self. Even if the book is not follow word for word, it still makes the reader question everything, down to if self-employment is right for you. This allows you to consider everything!

So what comes next?

Della explains how she has many plans for the future. She plans to do more speaking, writing and consultancy, as well as turning the book into an online course. Further down the line, Della also says how she plans to make an audio version of this book and then a second, more generic business book. It is clear she is not taking things easy!

Selling her business, competing in an Ironman and writing a book all in the last 12 months is an impressively productive mid-life crisis by anyone’s standards.

Getting to sit and talk with Della for an extended period, instead of our usual get together at a Xero meeting or a quick chat on social media was a real treat.  I would recommend some one on one time if you can – tea is a good motivator if it is first thing in the morning, but if you really want to impress her, take Cadbury’s Fruit & Nut along too!

To order a copy of the book
Order here 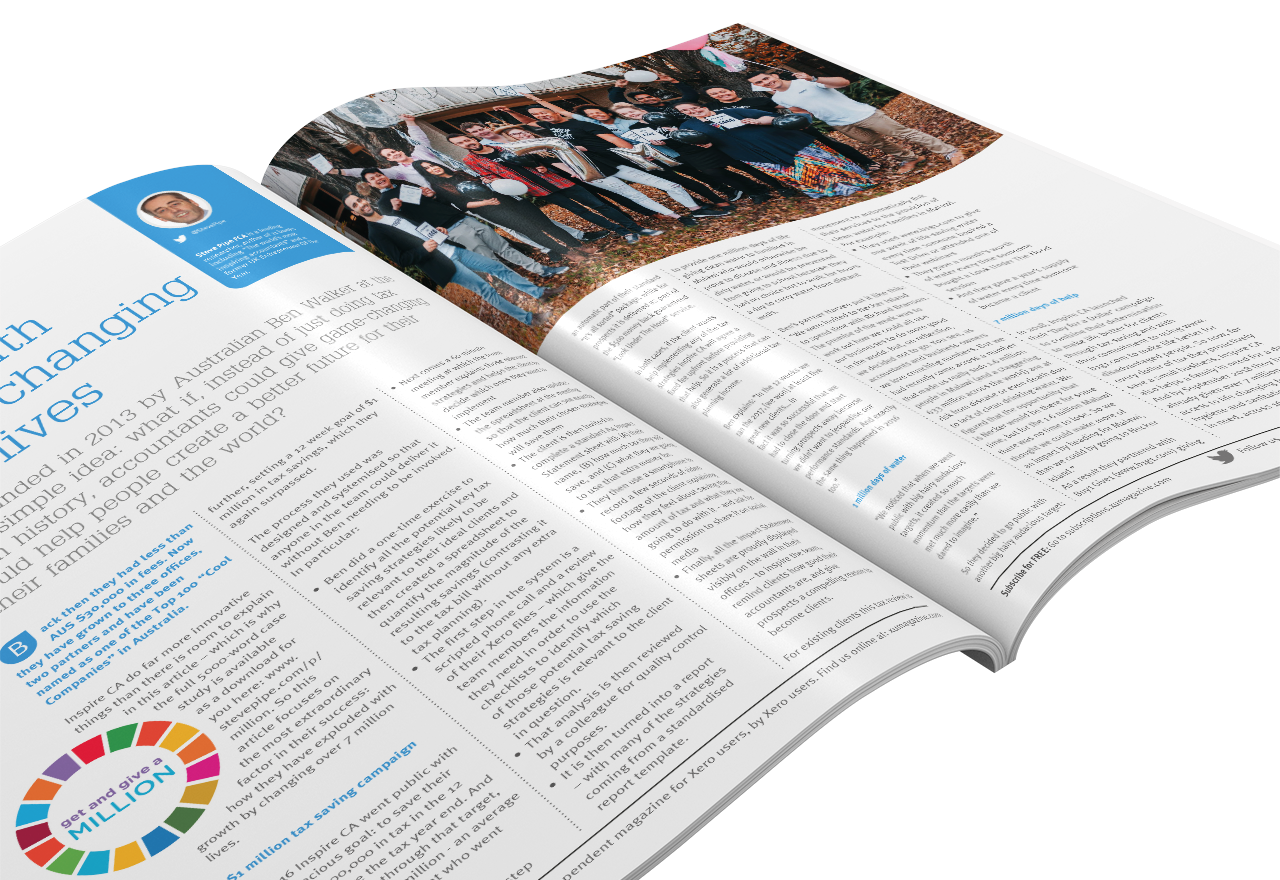 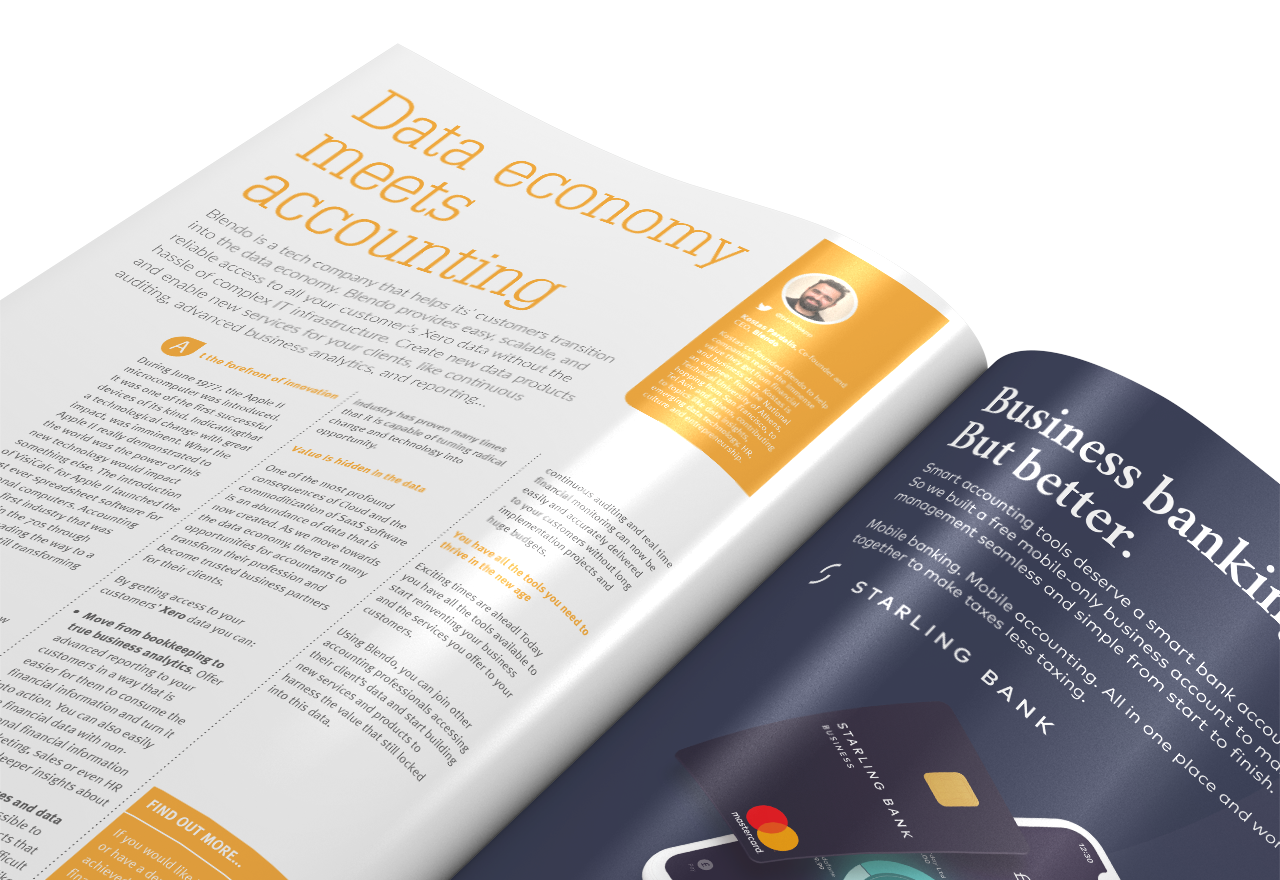 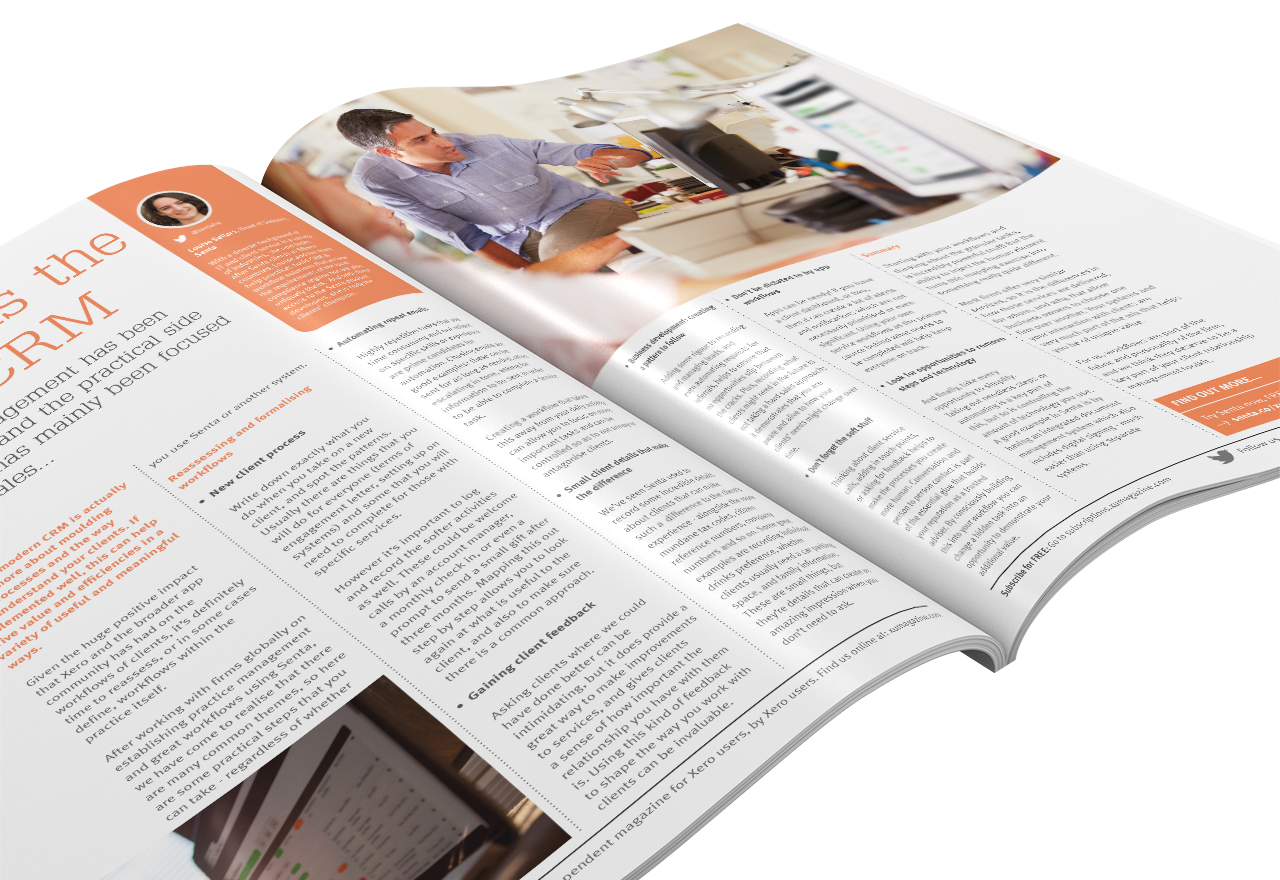 Workflow is the modern CRM